Warning: call_user_func_array() expects parameter 1 to be a valid callback, function 'custom_search_blocks_form_1' not found or invalid function name in drupal_retrieve_form() (line 844 of D:\sites\socialwork\includes\form.inc). 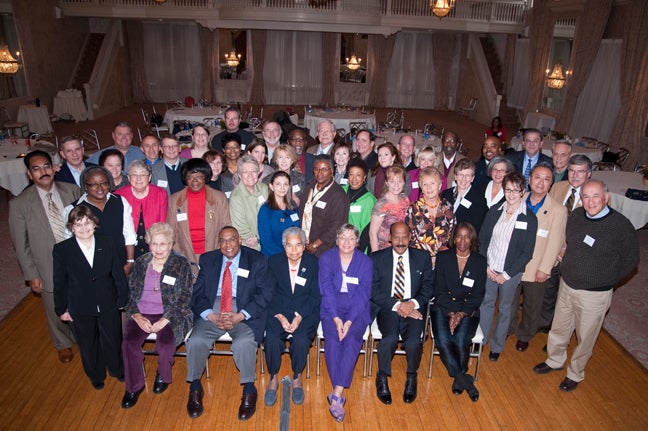 Jang, Heejung (2019) Effects of Social Relations on Mortality in the Context of Grandparenting

Bamwine, Patricia (2018) An Exploration of the Co-Victimization Experiences of Black Adolescent Males in Urban Environments

Lee, Lewis (2018) The Longitudinal Analysis of Moderated Mediation on the Relationship Between Employment Quality and Antisocial Behavior Among Formerly Incarcerated Young Adults

Jung, Nahri (2017).  Economic Integration of Immigrants in the United States.

Goode, Rachel Woodsom (2017) The Feasibility of a Binge Eating Intervention in African-American Women who are Overweight or Obese.

McCall, Janice (2016) An Examination of Gender-neutral and Gender-responsive Characteristics on Program Participation among Female State Prisoners.

Song, Hyun-a (2016) The Effects of Parents’ College Savings on College Attendance Among Students from Families with Low-Incomes: The Mediating Role of Parent’s Discussions about College with Their Children.

Bahorik, Amber The Longitudinal Impact of Intrinsic Motivation on Substance Use Severity in Schizophrenia and its Patterns in Men and Women

Lim, Crystal The Influence of Illness Burden and Social Support on the Completion of Kidney Transplant Evaluation

Phillips, Chereese (2015) Assessing The Impact Of Maternal Stressors on the Occurrence of Child Neglect Among At-Risk Mothers.

Teixeira, Samantha "It seems like no one cares":  Youth Perspectives on Housing Abandonment and Urban Blight

Constance-Huggins, Monique TANF Entry and Exit in the Post Welfare Reform Era:  The Contributions of Human Capital and Social Capital

Schelbe, Lisa  "Some Type of Way":  An Ethnography of Youth Again Out of the Child Welfare System

Thomas, Tammy  "Hey, Those are Teenagers and They are Doing Stuff":  Youth Participation in Community Development

Breneman, Catherine Crawford Evaluation of the Implementation of the Mentoring Program for Behavioral Health Service Coordinators in Allegheny County

Carrick, Kathleen Rose A Comparison Among Healthcare Students at the University of Pittsburgh in Attitudes about Lesbians and Gay Men and Support for Lesbian and Gay Human Rights

Smith, Mary Lindsey Just one more: An examination of the prevalence, correlates, and consequences of concurrent alcohol and medication use in older adults

Singer, Jonathan B. Mothers Seeking Mental Health Services for their Children: A Qualitative Analysis of Pathways to Care

Gilkey, So'Nia L. Shelter as Sanctuary: A Narrative Inquiry of the Experience of Homelessness

Santhouse, Robin Correlates of Service Utilization and Adherence to Dietary and Exercise Modifications in a Sample of Women Before and After Bariatric Surgery

Bell, Melissa M. Barriers in the Provision of Family Planning From Social Workers to their Clients

Fisher, Mary Anne Social Support for the HIV+ Client: A Comparison of the Effectiveness of Traditional Versus Volunteer Case Management Intervention

Pivetz, George Retirement, Control, and the Challenges of Aging

Trunzo, Annette C. Engagement, Parenting Skills, and Parent-Child Relations as Mediators of the Relationship Between Parental Self-Efficacy and Treatment Outcomes for Children with Conduct Problems

Stevenson, Andre P. Barriers Affecting Women's Ability to Make the Transition from Welfare to Work in a Rural Community

Hilko, Tamara Lynn  The Impact of the Permanency Planning Process on Achieving Permanency for Children Active in a County Children and Youth Agency

John-Langba, Johannes The Relationship of Sexual and Gender-Based Violence (SGBV) to Sexual-Risk Behavior Among Refugee Women in Botswana:  The Medicating Role of Depression

Little, Stacey  Understanding the Sociological Factors of Poverty and Their Impact on Prenatal Care Utilization Among Low-Income Women

Oh, Yunjin The Role and Effect of Psychosocial Resources and Gender Differences in Caregiving Stress

Ohmer, Mary Louise  Citizen Participation and its Effects in Neighborhood Organizations:  The Influence of Perceived Organizational Characteristics and Effectiveness

Smith, Christine  Correlates of Burnout Among Providers Who Serve the Homeless

Knudsen, Kraig The Diffusion of an Evidence-Based Practice:  A Case Study of High and Low Adopters of Assertive Community Treatment

Stubenbort, Karen The Effectiveness of Intervention for Maltreated Preschoolers:  An Attachment Theory Perspective

Breitenstein, Larry Managed Care Effects on the Reporting and Substantiation of Child Abuse and Neglect

Bonach, Kathryn  The Mediating Role of Forgiveness in the Relationship Between Post-Divorce Cognitive Processes and Co-Parenting Quality:  A Context, Process, Outcome Model

Manfred Gilham, Jerry Jo Use of an Orientation Engagement Strategy to Enhance the Therapeutic Alliance with a Child's Caregiver

Winter, Elizabeth The Impact of Childhood Maltreatment and Co-Morbidity on Depression Treatment Response in Adult Women

Sukitz, Sr. Carol A Study of Parish Social Ministry and Delivery of Social Services in the Neighborhood Community

The University of Pittsburgh School of Social Work, Child Welfare Education and Research Programs, are designed to strengthen child welfare services in Pennsylvania by increasing the number of qualified professionals and equipping them to deal with the increasingly complex demands of public child welfare practice.

The School of Social Work is committed to developing professionals and supporting agencies to serve older adults. Learn more about our Aging Initiatives & Programs.