Social work requires and depends on person to person interactions.  In a normal year, the Pitt School of Social Work has over 400 Master of Social Work students in field placements in over 600 local agencies in a variety of fields such as gerontology, children youth and families, human services management, and many more.  Despite the pandemic year of 2020, the vast majority of social work field placements proceeded, often with creative and innovative adaptations to the challenges of the Covid-19 pandemic.  In the case of the Foundation of HOPE field placement at the Allegheny County Jail, School of Social Work students fearlessly seized the opportunity to make a difference in the lives of traumatized people.  School of Social Work Director of Field Education John Dalessandro expressed his admiration for this group of students: “These young women took the candle of hope into a dark place, and took it as far as it could go without burning the place down.”

Aubree Snell, Dakota Staley, Emily Hurley and Sara Kaempf all chose Pitt for their Master of Social Work degree, eager to learn and grow with their careers from undergraduate and employment backgrounds that include clinical psychology, ministry, and child welfare.  A career in social work can lead to anywhere that human beings need help, and the Allegheny County Jail certainly qualifies as such a place.  Dakota Staley observed: “The people who end up in jail are the people who have been forced to make choices from a selection of no good choices.” 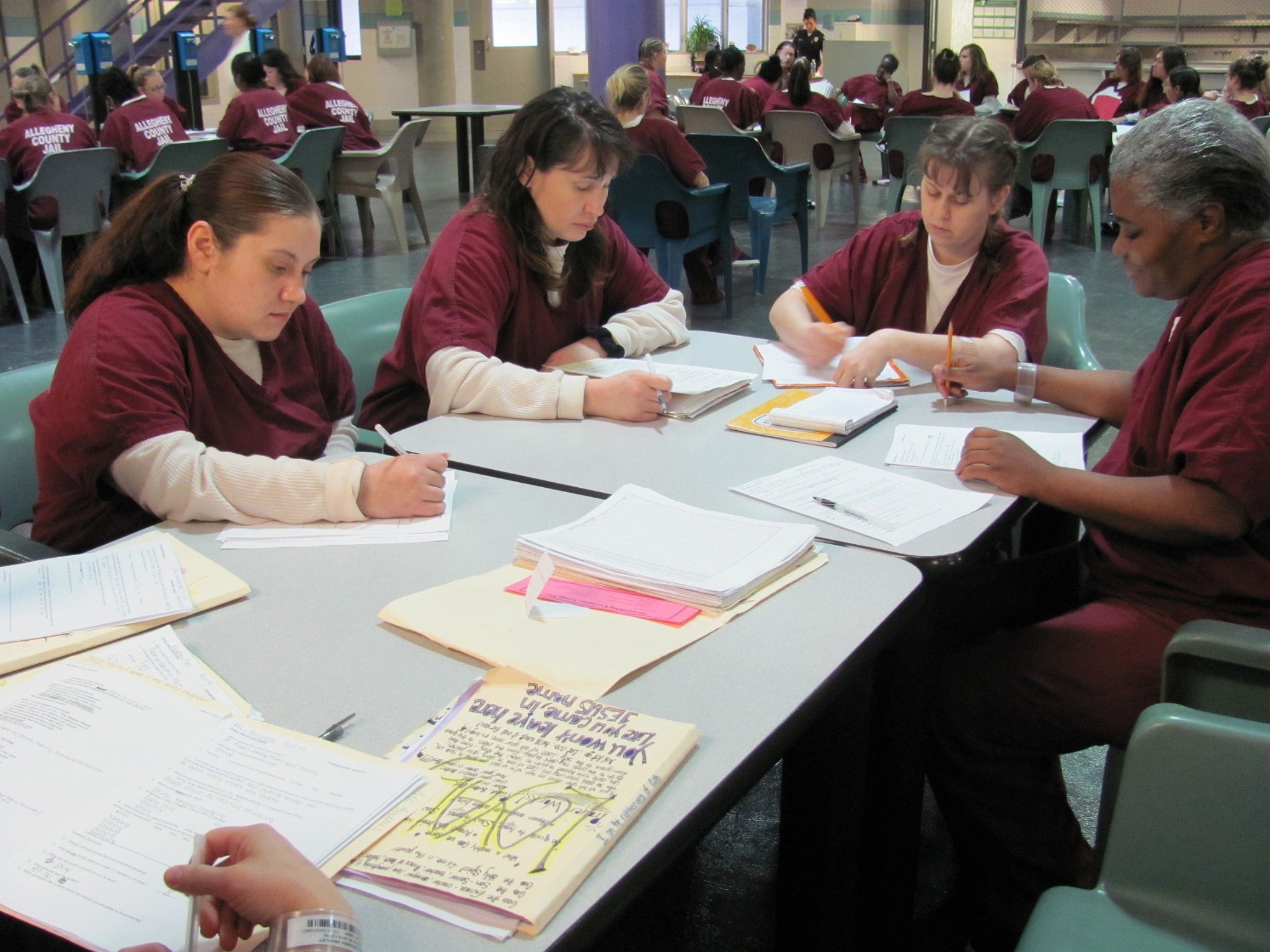 Unaddressed mental health issues, substance abuse, homelessness, hunger, and crimes of poverty like petty theft and disorderly behavior are among the primary reasons people may find themselves in the Allegheny County Jail.  Data shows that 75% of the jail population has a mental health or substance abuse disorder, and 48% have both.  Inability to pay for bail is another common reason for incarceration. Although many people in the jail will ultimately be found “not guilty” incarceration nonetheless results in the loss of home, vehicle, jobs, relationships, and estrangement from one’s children.  Subsequently, the stigma and legal ramifications associated with having been incarcerated (whether innocent or guilty) makes it very difficult to regain or restart life in a complex and often unforgiving world.

Approximately 30,000 people a year are arrested and incarcerated in the Allegheny County Jail.  The daily jail population varies between 2,500 and 2,700. Of that population, approximately 52% will return to jail, or recidivate.  A primary reason for recidivism is that once released, inmates will likely return to the places, people and issues that resulted in their incarceration in the first place. It’s well established that the US has the largest prison population on earth, and a concomitantly high recidivism rate.  Unless inmates request guidance from an agency such as Foundation of HOPE, the corrections system itself does not provide resources to prevent recidivism.

The Foundation of HOPE is a Pittsburgh non-profit that works in a variety of ways to support inmates at the Allegheny County Jail, including in its Pre-Release and Aftercare program that supports inmates once they are released.  Foundation executive director Jody Raeford leads the mission to provide spiritual support and practical help to inmates of all faiths or no faith, in a holistic manner that includes strategies to prevent arrest and re-arrest and to offer education and guidance to any inmate who requests it.  Raeford emphasizes: “People in jail are traumatized people.  Being incarcerated is inherently traumatizing, not only to the individual, but also to their entire family network. It changes relationships permanently.”

The Master of Social Work program at Pitt holds that field placements are the signature pedagogy of instruction and learning.  The intent is to connect evidence-based social work practice with coursework, based on the core competencies of social work as defined by the Council on Social Work Education.   At the start of the Allegheny County Jail field placement in 2020, in the midst of a global pandemic, the interns at Foundation of HOPE found themselves performing limited work with their clients, such as bringing them stamps and envelopes or looking up phone numbers.

Dissatisfied that this was not the best use of their education or abilities, the interns requested a meeting with John Dalessandro and Jody Raeford.  Subsequent to the meeting, the field education experience was expanded to give the interns access to multiple programs such as Aftercare and Pre-Release.   Weekly meetings to share and reflect on their experiences also helped the interns learn from each other and from the Foundation of HOPE staff who were supervising them.

Sara Kaempf’s passions are ministry and social work, so the Allegheny County Jail placement was a natural one for her.   Part of the reason she chose Pitt’s program was that she believes that Pittsburgh has excellent resources available and she was eager to connect her clients to them.  Along with the other interns, she noticed at first that they were not able to truly practice their social work skills and competencies, and she described low morale and a “high school lunchroom” atmosphere in the “pod” where the interns interacted with their clients.

Because of the pandemic forcing inmates into 23 hour per day lockdown, more jail inmates than ever (95 compared to a typical number of 60) were requesting placement in the Foundation of HOPE programs.  Eager to make more of a positive difference, Sara stepped up with her peers to make the case that social work interns be allowed more interaction with their clients, as well as have more guidance and supervision from the foundation staff.  Both John Dalessandro and Jody Raeford were receptive to the interns’ concerns, and changes were implemented fast.

Emily Hurley describes a situation she encountered one Friday afternoon at 4 pm.  She received a panicked phone call from one of her Allegheny County Jail clients, stating that he had just been released and was standing on the street outside the jail.  Originally from New York State, this gentleman did not know anyone in Pittsburgh, had no money and no place to go and told Emily he couldn’t go to a shelter because of his post-traumatic stress disorder.  Emily’s former experience at Children Youth and Families meant she had a good knowledge of resources in and around Pittsburgh, and she managed to make contact with a former colleague who suggested the Resolve Crisis Services through UPMC, which offers a 24 hour hotline to connect people with mental health services and support.

After making a phone call and emphasizing the critical nature of the situation, Emily found a residential facility able to take her client – except it was in Penn Hills.  Penn Hills is not an easy place to get to from downtown Pittsburgh.  Fortunately, Resolve Crisis Services was able to pick up her client and take him to their center.  Subsequently, he attended the Foundation’s Aftercare program, and Emily helped him apply for welfare benefits, clothing and housing.

Coming from a small town in Pennsylvania, Aubree Snell had entered the school of social work planning to continue her work in child-care, adoption and foster care.  When her field advisor suggested the Foundation of HOPE placement, working directly with inmates in the Allegheny County Jail, her mother was appalled: “Absolutely not!” she declared.  However, encouraged by her field advisor to at least talk to the diversion initiatives director, Aubree found she was intrigued and energized by the possibility of helping people avoid recidivism by connecting them with the education, skills, resources and agencies that could help them change their lives.

Aubree’s mother is now delighted and proud that her daughter has been offered a full-time job with the Foundation’s pre-release program, because she can see that the work is fulfilling, rewarding and necessary.  As for Aubree, she wakes up in the morning so eager to go to work, she doesn’t even consider it to be “work.”  She loves the variety of her day; one day searching for housing and job options in the State of Georgia at a client’s request, the next contacting the person caring for her client’s 3 small children and trying to find a way for the client to make bail and get back to her family.

Although Aubree’s background was nothing like that of the clients she now helps, she found that coursework such as “Diverse Populations” was a perfect complement to all she was learning in her field placement.  As Jody Raeford notes, “We recognize our field education students as students, but we also recognize them as teachers. Attending the University of Pittsburgh School of Social Work means they are coming into our organization being taught and exposed to best practices and fresh ideas.”  Working with people who initially appeared so different from her, Aubree found her initial intimidation vanished as she recognized and celebrated the common humanity she found with her clients.

As the director of volunteer engagement at the foundation, Anais Hussian notes that because clients in the jail have specifically requested services from the foundation they are very appreciative of the efforts made on their behalf.  Connecting with a School of Social Work intern who is trained and knowledgeable – and personally genuine, honest and authentic – is a very positive experience for them.  Classes in addiction and recovery, anger management, parenting and more helps prepare a person to cope in new ways with the stressors that likely played a role in their incarceration.  For School of Social Work interns, being able to put their social work values and skills into practice and connect their clients with the knowledge and skills to succeed where previously they fell short is tremendously rewarding.

Pitt’s Social Work program is one of the highest ranked programs’ in the country. The Foundation of HOPE placement at the Allegheny County jail has offered a truly transformational educational experience for the students and their clients. As Raeford notes: “One of the most fulfilling things to hear is when a student acknowledges that their experience has changed and affected them such that they will never define someone who has been incarcerated as a bad person or criminal.”  Raeford says that the interns from the school are “simply top notch – competent, knowledgeable, and capable.”

Although the pandemic provided hard challenges, it also provided opportunities to change and expand the role of the interns.  Social work values mandate respect for diversity, human rights, social, economic and environmental justice. Social workers are called to work with individuals, families, groups, organizations and communities. Because of the determination and dedication of the young women in this story, and the reputation of the University and the School, and the willingness of the Foundation and the Field program to accept constructive criticism, this social work field placement was a model of social work values in action.